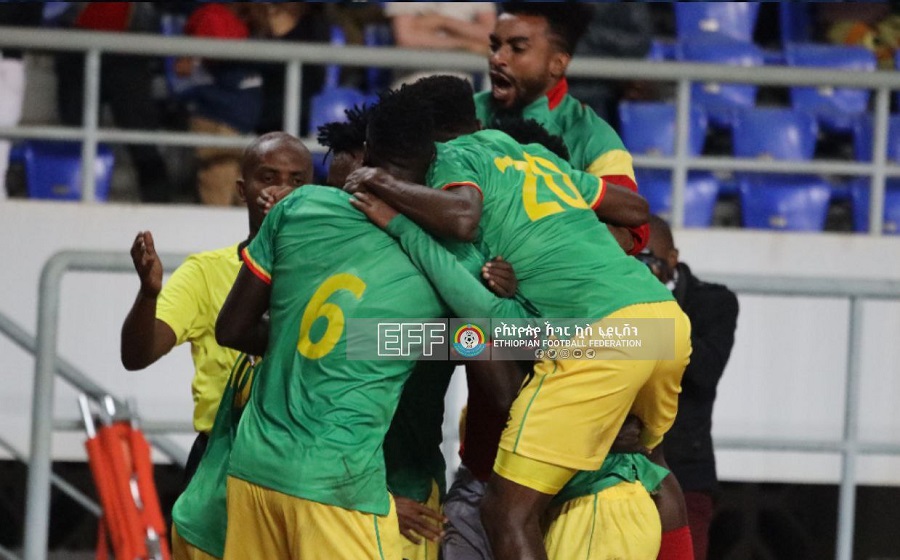 In what would go down as a very famous victory the Ethiopian national team crushed Egypt to top ” Group D” in AFCON qualifiers at the Bingu national stadium in Malawi.

Coach Wubetu Abate made two changes from the side defeated by Malawi, Gatoch Panom and Shimeles Bekele were starters replacing Mesud Mohammed and Surafel Dangachew.

From the onset, Ethiopia started very brightly by enjoying a greater share of the ball and then as the game went on they started to move the ball in the offensive third very quickly to create scoring chances.

Gatoch Panom’s long range effort in the 16th minute was the first real effort on goal and in the 21st minute Dawa Hotesa eventually opened the scoring, Abubeker Nasser made a marvelous run with the ball from out to in the right corridor to set up Dawa Hotesa to slot home the opening goal.

The attacking spree from the Ethiopian side continued once they got infront, especially the team was brave enough to press high and create high turnovers to dismantle the stumbling Egyptian defense as well as finding runners behind Egypt’s backline creating havoc.

The right sided offense was spectacular in the first half as so many head scratching goal scoring chances were launched from there especially the 24th minute chance from Abubeker Nasser that came off the upright was very incredible.

In the 40th minute, Shimeles Bekele doubled Ethiopia’s lead after Amanuel G/Micheal put him through a delicious pass.

In what was a very comprehensive first half display from “The Walias” they dominated the game in every aspect, as they created a total of nine attempts with four of them hitting the target while Egypt couldn’t register any attempt in the first half were forced to make three changes in quick succession to change the complexion of the game.

After the restart, Egypt seem to grow into the game but Wubet Abate’s men were very disciplined and aggressive off the ball in winning the ball high and also creating quick offensive transition situations to capitalize on the space left by the Egyptians.

“The Walias” excellent game management was on display in the second half as they set the tempo by their wish frustrating the Egyptians and did so to finish the game with 2-0 winners.

In the other fixture, Guinea beat Malawi courtesy to a late goal from Naby Keïta making the group very interesting as all teams in the group collect 3 points from two games with Ethiopia leading the way with a better goal difference.