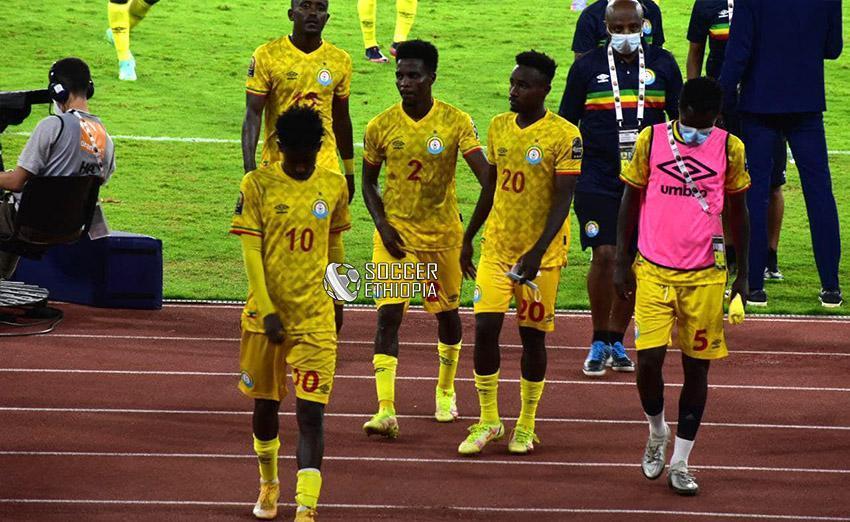 Football is all about result, but always on pitch performances shall be measured and be given credit for. Ethiopia were thrashed by Cameron but the performance especially in the first half is the one the Ethiopians should be proud of but failed to sustain over the entirety of the match.

Wubetu Abate deployed the more familiar 4-3-3(4-1-4-1) as he made a big call to drop their skipper Getaneh Kebede replacing him with Dawa Hottesa, meaning Abubeker Nasser is moved to his preferred central striking role as opposed to playing from the wide left as he did in the last game.

Walia’s were positive with or without the ball from the get go and opened the scoring in the 4th minute through Dawa Hottesa from a well worked offensive transition after a possession turnover deep into their own half.

The first half witnessed a much improved build up play from Ethiopia this might be due to Cameron’s not willing to press Ethiopia high rather they were reluctant to create turnovers in the middle of the pitch and also in their defensive zone.

The Cameroonian had little interest to put pressure in the first 30 meters of the pitch, Cameron playing with two men up front were mainly focusing on restricting passes between Ethiopia’s CB. Ethiopia with so much space and time were not that effective in creating passing sequences and successfully building from the back frequently, but started to adjust deep into the first half with the left sided CB Mingote Debebe start to act as an alternative ball carrier to progress the ball smoothly.

Mingote Debebe was a player with the most touches (73) showing his improvement throughout the game, also Ethiopia lost possession in its own defensive third only 23 times which was a drastic decrease from the first game where they lost 48 times.

Further up the field, Abubeker Nasser who was operating as a “false 9” was seen maneuvering here and there to facilitate ball progression, of the 53 touches he had in the entire 90 minutes most of them were in the center of the pitch and also floating here and there.

Off the ball, they were utilizing a very high defensive line with a 4-1-4-1 pressing scheme to compress the pitch, the veteran Mesud Mohammed was acting as a pressing trigger to initiate Ethiopia’s press by joining high with Abubeker Nasser, but of the 43 total recoveries, the attacking third recoveries (4) and midfield recoveries (13) were very low proving that there was the intent but the execution was lacking.

Offensively Ethiopia’s overall play has improved, by a measure of the quality of chances created (XG) it has improved significantly from 0.26 against Cape Verde to 1.63 in Cameroon’s game. While Cameron outscored them with an XG of 2.25.

Ethiopia especially in the first half had much of their attacking play coming from the wings, with 44.4% & 42.6% coming from the left and right side respectively with only 13.0% of it coming through the middle, this was evident as Amanuel G/Micheal mainly & Dawa Hottesa were behind with a couple of chances were Ethiopia threatened.

Dawa Hottesa was also forced to do a lot of defensive work to help a seemingly offensively tasked left back Remedan Yesuf, as he was given more freedom to move higher up the pitch mainly in the first half while on the right side Suleiman Hamid was playing cautiously in line with the CB pairing.

Possession wise the game was evenly contested, Ethiopia had about 458 passes(86.46% accuracy) with 203 (79.8% accuracy) of them coming in opponent half and 99 progressing to the final third with 68.68% success and of all the passes 283(61.79%) of them were forward passed, which was a slight increase from the first game.

Also, Ethiopia entered the final third 54 times and entered the opponent penalty area 13 times also they had 12 shots with 5 of them hitting the target.

But the second half overall display was a testament that the Cameroon national team is away from ahead of its Ethiopian counterpart in tactical and physical aspects of the game, as they were the dominant side in the contest after Ethiopia’s first half domination.

Coming into the second half Toni Concensao’s men were very aggressive in those 1v1 midfield situations coming out on top in most of the contests, thus whenever there is turnover in possession they would transition quickly putting runners behind the higher defensive line of Ethiopia.

Once Cameron scored the second goal the home side backed by the galvanized crowd were all at it with a shift in momentum it was a matter of time before they grabbed each other.

All the four goals Cameron scored in the entirety of the had similarity in their manner as we mentioned above. Also, the goals were originated from Cameron’s lateral attack with ball watching defending a common defensive issue playing a part in the goals. Once again Ethiopia’s defensive players were caught napping as their only focus was on the ball instead if they have scanned the space and where the opponent player is the story might be different.