Three fixtures of huge importance in the top and tail end of the log were held today at 10 Am local time in three different venues to decide who will be going home with the trophy and the other side joining Sebeta Ketema and Jimma Aba Jiffar in going down to the higher league.

All eyes were on the Bahirdar international Stadium as Kidus Giorgis who had a slight advantage coming into the last round of fixtures take on the Addis Ababa Ketema side who were just outside the drop zone and had a better chance of staying up.

Fasil Kenema in the meantime were up against relegation threatened DireDawa Ketema at the Bahirdar University Stadium where both sides needed to collect all three points and wait for the result at the Bahirdar international side to go their way to respectively achieve their aspiration of retaining the title or staying up.

Meanwhile, Adama Ketema and Hawassa Ketema were up against each other at the Atse Tewodrose Stadium in which the outcome of their clash might have a say in who goes down.

With the three fixtures kicking off at the same time it was Fasil Kenema who got the breakthrough goal first in the 16th minute through the player of the season nominee Bereket Desta applying the choke on Kidus Giorgis, But Kidus Giorgis also kept their calm and took the lead in what was a nervy first half through their Togolese import Ismael Oro-Agoro settling the nerves.

Addis Ababa Ketema threatened to have a go at Kidus Giorgis goal but Kidus Giorgis backed by their traveling supports hold on to their lead, In the other Fixture at the Atse Tewodrose stadium Abdissa Jemal also scored twice in quick succession deep into the first half and an extra time strike from Dawa Hottesa seem to ensure Adama’s premier league status next season just before halftime.

Those were the scores going into the break meaning Kidus Giorgis are a step closer to be crowned champions while Dire Dawa seems to be on the brink of relegation after six years of premier league football. 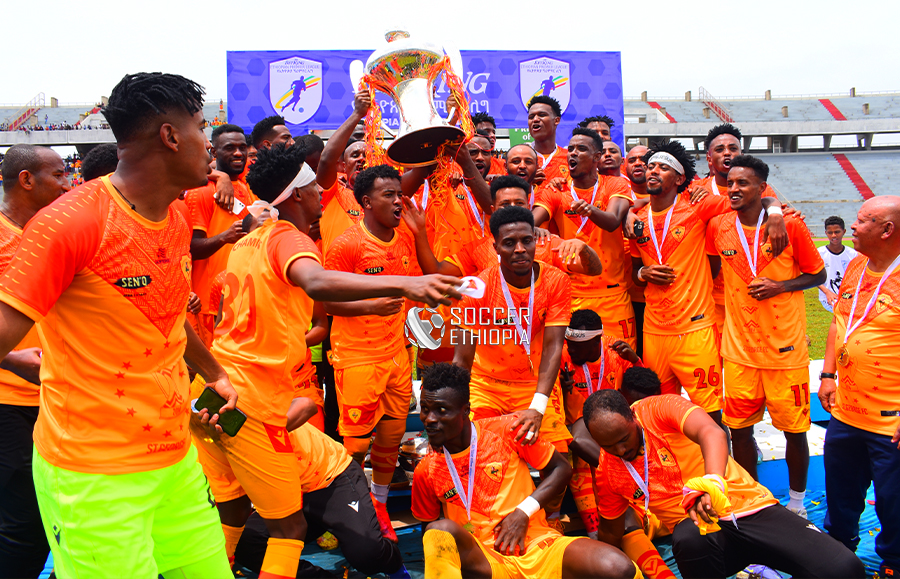 After the restart, Ismael Oro-Agoro doubled Kidus Giorgis’s lead after a controversial penalty call from the referee Haileyesus Bazezew in the 54th minute, Minutes later also Bezabih Meleyo added another goal for the desperate Fasil Kenema who were needing a slipup for Kidus Giorgis.

As the clock continued ticking Dire Dawa’s survival was also fading away but second half substitute Gadissa Mebrate pulled one back for Dire Dawa in the 77th minute to spark their hopes back on track.

Gadisa’s goal seemed to inspire Samson Ayele’s boys who once again got the equalizing goal through Henok Ayele in the 85th minute.

Things even got from bad to worse for Fasil Kenema as Amanuel G/Micheal added another goal for Kidus Giorgis at the Bahirdar international stadium, just before they also conceded another goal from their ex-player Abdurahman Mubarek in the 88th minute.

Kidus Giorgis who were running rampant against Addis Ababa also added another goal through the industrious Amanuel Gebre Micheal to put the icing on the cake.

Meanwhile, at the Atse Twodrose stadium, Hawassa’s hope of late resurgence failed to materialize but they pulled two goals back in the name of Abenezer Ote and Biruk Beyene, Biruk is now the 5th joint top scorer with 14 goals.

Dire’s late comeback after coming back from two goals down to beat Fasil Kenema meant they secure their premier league status for yet another season while Addis Ababa who had a better chance of staying up coming into the last round of fixtures were once again demoted to the Higher League.