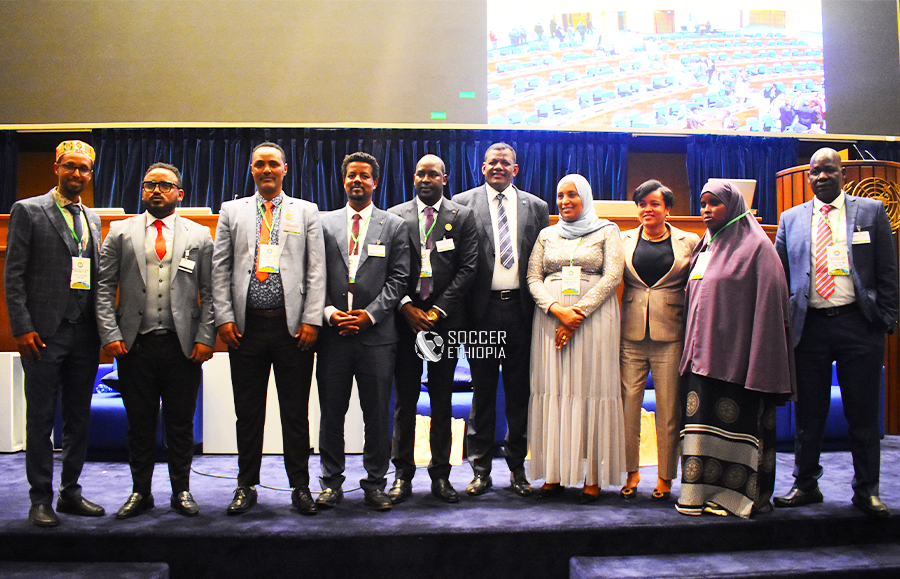 In a press conference held on Monday, the Electoral Committee of the Ethiopian Football Federation called the election which ended a week ago a success and elaborated on the many challenges the committee faced while conducting the election.

Hailu Mola, the chairperson of the electoral committee, stated that initially 5 regions didn’t present candidates and the postponement of the submission date was essential in making sure that all candidates were available.
He also stated that the CAF and FIFA representatives talked to them on the day of the election to ask about how the preparation went and what the process was like.

Regarding his celebration during the election process, which was a huge topic point among many media outlets and football fans, he said “I didn’t celebrate because Isayas won. I showed my emotion because the election was successful. If the casted vote was 139 instead of 138 the election would’ve been repeated. But people took my reaction to TikTok without context.”

He further added that when the venue was about to be changed from Gondar to Addis Ababa the committee discussed it with the EFF president and General Secretary. While they weren’t fully convinced that it all happened so suddenly it was seen as necessary to make the decision. Hailu said there are still things to be improved: “We haven’t learned much from the Afar election. Hopefully, we will do so 4 years later.”

Belete Zewde, vice chairperson of the electoral committee, told the media why it was necessary to prevent cameras near where the casting of the votes was taking place. He said it was to prevent voting interference and nothing more.

Further elaboration was given as to why some candidates weren’t eligible for election and why female candidates were voted first. A recommendation was also given that the rule book should be revised to prevent such controversies.

There were many attempts to buy votes according to different media outlets and when this question was raised to Mr. Hailu he said apart from a call he received a day before the election from a police officer there was nothing he heard. The culprits mentioned in this instant weren’t directly involved in the election.

One of the presidential candidates Melaku Fenta said the election wasn’t fair at a press conference. He added that he already knew who was going to be voted before the election was started and the voters were already told who to vote for. Mr. Hailu responded by saying that he didn’t follow any media outlets and didn’t receive an official complaint.

While the election was dubbed successful in the eyes of the committee there are still many voices saying it was not fair. The different talking points before the election like the league company accusing the Federation, the venue change and talks about trying to buy votes are all indications that when it comes to the election our football is far from being successful. There always seems to be some controversy brewing and many unhappy parties in the process.

The election might not cause Ethiopia to be punished by FIFA but doubts still linger as to how the process can be called successful. Every football fan hopes that an election doesn’t equate to chaos every four years.