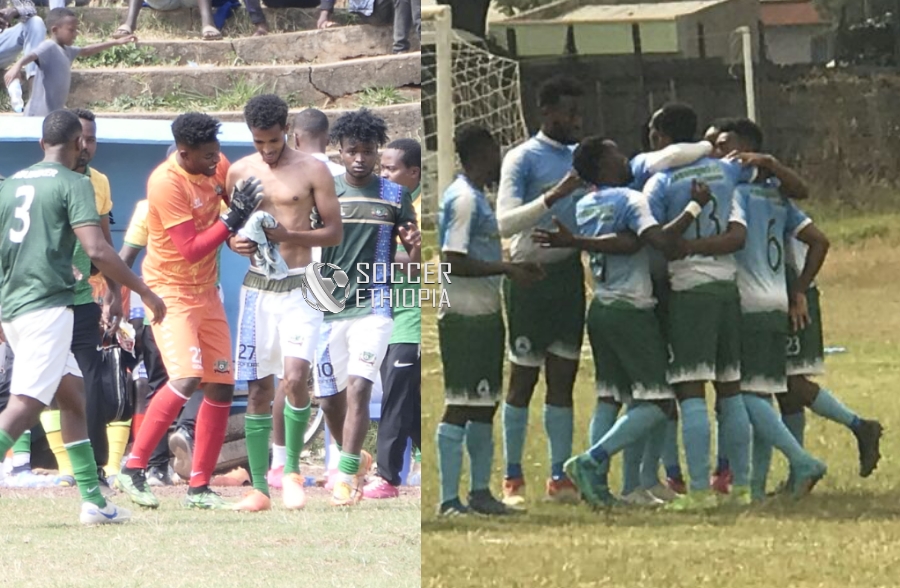 Match Day five of the Ethiopian Higher League resumed with matches taking place across three towns on Friday and Saturday.

The much-anticipated game between Batu Ketema and Ethiopia Nigid Bank ended in a 1-0 win for Batu. Batu’s Fitsum Alemayehu was sent off in the first half in a game that saw plenty of disagreements between players and the referee. Batu were much better in the second half and managed to take the lead in the 58th minute despite going a man down. Ashebir Wero was the man who got the only goal of the game from the spot kick. Following this result Batu Ketema climb up to 3rd while Ethiopia Nigid Bank drop down to 4th place.

Bench Maji Bunna got a 1-0 win against Akaki Kaliti at Bahir Dar. It was Mulualem Beyene who grabbed the only goal of the match five minutes after coming on a sub. His calm finish in the 87th minute was enough to decide the match and help Bench Maji sit at the top of the table.

Second placed Gamo Chencha also beat Durame 1-0 to finish the match in second place. Solomon Getachew got the winning goal in the 72nd minute. In the other games Woldia Ketema drew 0-0 with Addis Ketema, Butajira Ketema and Sendafa Beke shared the spoils as the game ended 1-1, Jimma Aba Bunna lost 1-0 to Halaba Ketema, and Sebeta Ketema and Wollo Kombolcha drew 1-1.

Nekemte Ketema got back to winning ways by beating Nib 3-0. Bona Boka grabbed a brace while Megnot Markos scored the other goal.

Kembata Shinshicho managed to beat Kirkos Kifle Ketema 1-0 thanks to a goal from Adugna Gebremedin.
In the other games Yirga Chefe Bunna beat Gulele Kifle Ketema 3-0, Ambo Ketema lost 1-3 to Kefa Bunna, Injibara Ketema were 0-2 losers against Debrebirhan and Boditi Ketema got a 2-0 win over Jinka.

Top of the table Hambericho Durame continued their winning run by beating Burayou Ketema 1-0. The big game in the group was between Kolfe Keranio and Dessie Ketema. The game ended 0-0. A win for either side would’ve enabled them to close the gap to top spot but they were unable to take advantage. Elsewhere Federal Police lost 0-1 to Yeka Kifle Ketema, Sodo Ketema were defeated 1-2 by Negele Arsi, Robe Ketema drew 1-1 with Silte Wurabe, and Jimma Aba Jifar lost 0-2 to Gelan Ketema.